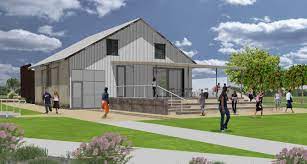 Donnybrook’s varied and colourful heritage will be celebrated this weekend with the opening of Station Square and the Donnybrook Heritage Goods Shed Interpretative Centre.

The much-anticipated revitalisation of Donnybrook’s Town Centre will tell the story of Donnybrook and provides a link to east and west sides of the railway track that unfortunately in the past has divided our evolving and unique townscape.

Chief Executive Officer Ben Rose advises this free community event, funded by the Shire of Donnybrook Balingup and Lotterywest, will take place on Saturday 19 June to coincide with the Donnybrook Station Markets.

“Live music, family activities and rail model displays will take place from 9.00am to 2.00pm, as part of the celebrations, the 150 years of Railway Western Australia will be recognised with an old goods carriage on display from Railway Heritage WA and the South West Rail and Heritage Centre” Mr Rose said.

Local artist, ‘Papa Giuseppe’, will be painting the carriage whilst keeping in context it’s age and patina. Over the past few weeks, the local artist has been working closely with the Donnybrook High School on a collaborative project that will see a series of artistic panels on display during the opening day celebrations.

The ceremonial celebrations will take place at 10.00am, with Shire President Cr Brian Piesse and the Hon. Alannah MacTiernan MLC, Minister for Primary Industries and Regional Development officially opening the precinct and interpretive centre alongside key stakeholders who contributed to the project.

The Goods Shed will be opened on Saturday to provide the community with the opportunity to preview the historical and heritage exposé embodied in the Interpretive Centre, which dates back to 1842, when Irish settlers George Nash and James Bissonnet together with four servants took up an allotment in Irishtown as we know it today.

The Interpretive Centre will be professionally managed by April and Ian Pianta under a lease arrangement with Shire.

The town’s heritage and history will be showcased on a series of information panels adorning the walls of the Shed, in addition to various interactive digital media and several historical society artefacts that will be on display, albeit rotated from time to time with other history memorabilia held by the Historical Society. The centre managers will be responsible for the day-to-day operations of the facility with the Interpretive Centre being completely accessible to the public in the coming weeks.

Shire President Brian Piesse said “the Interpretive Centre will join the Apple Fun Park (currently undergoing a $1.5m makeover), the Golden Valley Tree Park and a soon to be, state-of-the-art Pump Track will become our prime iconic all year around tourist attractions. Unlike many other similar attractions throughout the State, admission will be free, which provides real value to our tourism and retail-based business sector throughout the Shire. As the new facilities draw more tourists to the area, the upgrading of Collins Street adjacent to Station Square will no doubt reduce main street traffic and parking congestion.”

Mr Rose said, “in 2019, with the support and advocacy of the member for Collie Preston at the time, the Hon. Mick Murray, the Shire secured a $2m funding grant through the Royalties for Regions program to restore the heritage listed Goods Shed. After extensive consultation followed with key stakeholders and the community, a range of ideas were presented and over 300 submissions were received from community members and visitors which guided the content of the Masterplan that was adopted by Council in November 2019.”

“With the opening of the Heritage Goods Shed – Interpretive Centre in Station Square, Donnybrook as the core of the South West can cement it geographic location as the gateway to the Southern Forest and Valley, and the Great Southern regions, as it was with advent of superphosphate out of Bunbury in 1930, when rail played a major part in the economic development of the South West down through Manjimup and beyond, and out through Boyup Brook and Kojonup joining up with the Great Southern Railway line in Katanning,” Cr Piesse said.

August summary of our local Eateries!

July 2021 Summary of our local eateries!

Balingup Primary School invites you to join them for the 2021 NAIDOC week celebrations! Undalup Association visit again this year […]